A high maintenance city girl. A rough around the edges cowboy. Sparks will fly…but will opposites really attract?

Eva’s determined to plan her best friend’s dream wedding…even if it is at a lodge in the mountains. More familiar with limos than horses, Eva’s going to need some help. But pulling off the perfect wedding isn’t going to be easy, especially with Jeff, the all too handsome cowboy determined to get in her way.

It’s way too easy to push the city girl’s buttons, and Jeff’s enjoying every minute of it. The sparks that keep flying between them are definitely keeping things interesting and there’s no way either of them can deny the attraction between them.

But Eva’s sworn off men and even if she did allow herself to act on the feelings that keep growing stronger, there’s the small matter of her ‘fake date’ to deal with.

Opposites will definitely attract, but only if they can get out of their own way long enough to see what they could have—together.

Dear Reader,
I hope you enjoy your visit back to Castle Mountain Lodge. I’ve wanted to write Eva’s story since we first met her in, Unexpected Gifts. I’m thrilled that she finally has her own story of finding love, and in one of the most beautiful places on earth, the Rocky Mountains!
Elena

With one hand, Eva Andrews navigated the snowy mountain road that led to Castle Mountain Lodge, while she reached for her cell phone and hit the Bluetooth button, answering the call. If Andi was with her, she would have lectured her about distracted driving, and yes, Eva knew she should probably focus on the road, but she never could ignore a ringing phone. It could be a client for their Party Hearty business, and making clients wait wasn’t good business. 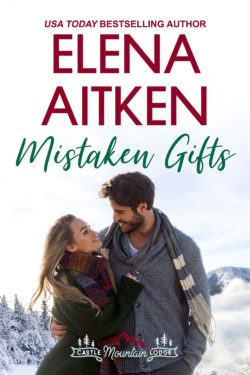 But it wasn’t a client’s voice that came on the line.

“Hey babe,” Liam’s confident and slightly cocky voice boomed over the speaker system of the car. Eva tried not to roll her eyes at the nickname he’d given her, but a small smile tugged at her lips, too. They’d only been dating a little over a month, but as independent as she was, Eva had to admit, she liked the way he took charge of any situation, even if it was with a lame nickname. Sometimes a girl liked to feel taken care of.

“Hey yourself,” she said, her voice laced with flirtation. “It’s about time you called me back. I still need an answer about next weekend.”

“Remind me again,” he said. “What’s next weekend?”

Eva swallowed her sigh. “My friends are getting married, remember. Andi and Colin? I thought I’d mentioned it.” She probably should have been more annoyed, but it was possible in all the planning she’d been doing for the big day, she’d forgotten to mention the fact that she wanted Liam to come up to the Lodge for the weekend and be her date.

It was a big step, but she wasn’t getting any younger and he’d have to meet her friends sooner or later.

“Oh yeah,” he said, “you did mention it and you know I’d love to meet your friends, babe. But–”

Liam sighed, and started in on how busy he was and how he couldn’t just sneak off for a weekend in the mountains whenever he wanted. Eva tuned Liam’s monologue out as she concentrated on the road. The heavy clouds that had been threatening to let go finally had, and the snow was falling faster and heavier than she would’ve liked.

“Well, that’s the thing, babe.” He paused and the silence was heavy. “I don’t think my wife would like it if I skipped out for a whole weekend.”

The car swerved and Eva quickly righted it on the road. “Your wife?” she managed to choke out. She’d been expecting bad, but not a wife.

“Yeah, Bridgette. I was going to mention her, but I guess I didn’t have the chance yet.”

Eva’s mind flew through the conversations they’d had. There hadn’t been many, and she did have a tendency to tune him out when he started rambling, but still, she would’ve remembered a detail like a wife. “You most certainly did not,” she said.

“No big deal?” Eva clenched the steering wheel and tried desperately to control her anger so she wouldn’t drive herself into the snowy ditch. “I’d say having a wife is a pretty big deal.”

“Yeah, are you mad? Because Bridgette doesn’t mind. We have kind of an open–”

“Are you mad?” Eva hollered into the car. “Are you freaking insane, Liam? How can your wife not mind that you’re dating me.”

“It’s not really dating though, is it? I mean, I thought we were just screw–”

“Don’t say it,” Eva said through clenched teeth. “Do not say one more word.”

He was at least smart enough to listen to that piece of advice and silence filled the car, pressing down on Eva until she spoke through clenched teeth. “Don’t you have anything to say for yourself?”

“Forget it,” Eva said, and pushed the button on her cell phone, ending the call. “You’re not worth it anyway,” she said to the empty car.

None of them were. When it came to the men she dated, if it wasn’t one thing, it was something else. She probably wouldn’t know a decent guy if he walked right up to her and handed her a rose. But a wife? That was a new one. Eva hit the steering wheel with the palm of her hand, causing the car to swerve on the ice.

“Dammit,” she muttered, and returned her focus to the road. There was no point dwelling on whatever it had been with Liam; it wasn’t serious anyway. But the road conditions were. She clenched her fingers tighter on the wheel and concentrated on making it up the mountain to the Lodge without driving into the ditch. Andi sounded beyond stressed last time they’d spoken and Eva was pretty sure it would put her best friend over the edge if anything happened to delay her arrival.

“You’re here!” Andi flew across the foyer and wrapped her arms around Eva before she had a chance to shake the snow off her coat. “What took you so long? I’ve been expecting you for hours.”

Eva wiggled out of her best friend’s grasp and took a step back. Andi radiated and her smile was contagious.

“I don’t know if you noticed,” Eva said with a gesture in the direction of the window. “But there’s a blizzard out there.”

Andi waved her hand in dismissal. “It’s just a few flakes. It’s January in the middle of the mountains–what did you expect?”

“Just once, I’d like to come up here in decent weather. Why is it that you’re always having some party emergency in the middle of winter?”

Andi shrugged and took Eva’s arm in hers. “Come on,” she said. “Carmen will have your bags taken up to your room.” They walked through the large timber-framed lobby, and down a hall that led to the banquet room. “I keep telling you to come and visit in the summertime,” Andi said. “If you think it’s beautiful with the snow, you should see it with the wildflowers blooming, and the sun sparkling on the pond. It’s beyond magical.”

Eva stopped short and stared at her friend and business partner who she knew better than anyone. “Are you feeling okay? Because I know it’s pretty here and all, but it wasn’t that long ago when I never would have heard such crazy things come out of your mouth.”

“Colin. I know,” Eva said good-naturedly. “You’re in love and that makes the world look brighter. And I’m happy for you.” Andi raised an eyebrow and Eva quickly added, “I am.” She squeezed Andi’s arm. “I really am,” she said again, this time looking in her friend’s eyes.

After a moment, Andi wrapped her arm around Eva’s shoulders and they resumed walking down the hallway towards the banquet room. “I know you are,” she said. “And soon you’ll know exactly how I’m feeling. I have a good feeling that this new guy. Liam, is it?” Andi glanced up, but without waiting for an answer, she kept talking. “I have a feeling that Liam might just be the guy that can handle you and finally make you settle down. Everything you’ve told me about him, he sounds like–“