Snowed in for Christmas…She only wants to ignore it. But he’s determined to show her everything the season has to offer…including love.

For Andi Williams, Christmas represents everything she’s supposed to have—and doesn’t. Running away to a remote mountain lodge seems like the perfect way to escape the season. And it would have been if it weren’t for the snow storm and a booking mix-up that finds her stranded. That is, until a rough around the edges, green eyed stranger offers a solution.

There was no way in good conscious that Colin Hartford could leave the woman with nowhere to stay. Especially on Christmas. He knows all too well what it’s like to be alone for the holidays. It isn’t long before Colin’s determination to enjoy the festivities he’s missed for so long sweeps Andi into the season of joy that she’s not so sure she’s ready for.

If Andi can allow herself to open up—just a little—she might finally have the chance to experience everything the holidays can really offer…including love.

Dear Reader,
I hope you enjoy this seasonal escape to one of my favorite places, The Canadian Rocky Mountains. I’ve always felt the mountains are magical in their ability to soothe, inspire and heal. And I believe that wonderful things can happen when you’re surrounded by their beauty. Including the magic of falling in love.
To me, there is nothing more special than spending the holiday season surrounded by snow, pine trees and the towering peaks of the Rockies.
It is truly my wish that you enjoy this little escape and fall in love with Castle Mountain Lodge during the majestic winter season.
Elena

Unable to take one more second, Andi Williams spun around and hit the power button on the stereo. Bing Crosby’s Winter Wonderland cut off mid-wonder and blissful silence filled the space. 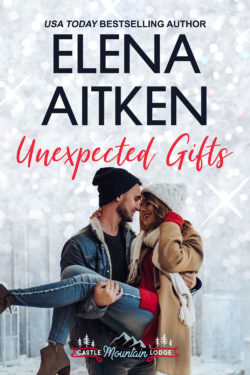 Her best friend and business partner, Eva, appeared from the storage room wearing antlers and holding a Santa and an elf hat in each of her hands. She glanced at the mute stereo and shot Andi a look. “Which do you think?” she asked and held up the hats.

“Go with the reindeer,” she said. “Santa is over done and if you dress as an elf, people might get the wrong idea about Santa’s little helper.” With Eva’s tall, curvy body, pretty much anything she wore gave men the wrong idea.

“It is a party for the Senior Mens’ curling team.” Eva tossed the other two hats behind her onto a shelf and moved over to the stereo, flicking it on again.

Party Hearty, their event planning business, was stuffed into a tiny office, with barely enough room for their desks and a couch for client meetings. Despite the small space, Eva felt it was crucial to maintain a festive atmosphere for potential clients, which, in her opinion, meant carols on repeat play and the overpowering scent of cinnamon and apple spice. For Andi, it was less festive and more like torture to be constantly surrounded by a reminder of the holidays.

“Definitely the reindeer then,” Andi said trying her best to ignore the music. “When did we get the curling team? I don’t remember it in the books.”

Andi was in charge of bookings and most of the business side for Party Hearty, but this year, the holiday season had been their busiest ever. She’d be relieved when it was over. It’s not that Andi was dreading the holiday season because it meant working late into the night, or juggling schedules, or even trying to find enough staff to work each party, no, it was because Christmas this year represented everything Andi was supposed to have, and didn’t.

“It was a last minute thing,” Eva said. “They called yesterday and the party’s this Saturday. Short notice, means lots of extra cash. Plus, it’s a no brainer. I already have the girls working out the details.”

The ‘girls’ were the two college students Andi had hired at the beginning of November. They’d been a blessing and naturals at the party business, as college students usually were. Regardless, their presence meant Andi could stay in the office and as far away from the actual parties as possible. Exactly where she wanted to be.

“What’s in the bags?” Eva asked and pointed to the pile of packages stacked next to Andi’s desk. “Don’t tell me you have presents in there? I thought you hated Christmas?”

Andi sighed and rolled her eyes. “It’s not that I hate Christmas…”

“I got the boys their gifts,” Andi said. “Watching my little brothers open their presents is going to be the only saving grace to this stupid holiday.” She flopped backwards, sinking into her leather chair. Her desk was organized into neat piles of invoices, to-do lists and a growing stack of unopened Christmas cards and invitations. Andi moved a magazine so it was covering the envelopes. “Three is the perfect age for this stuff. And when they see the drums I got them, they’re going to go crazy.” Andi flashed a wicked smile.

“Your dad is going to kill you,” Eva said.

“It’s his own fault for having twins at his age. Besides, isn’t that my job as the older half sister?”

Eva didn’t answer her. Instead she tossed a thick, red envelope on her desk. “This came for you today.”

Andi knew what it was before she even turned it over to read the calligraphy on the front. The invitation to the Porter’s Annual Night Before, The Night Before, Christmas Party. Her stomach churned and for a brief, terrifying moment she thought she might throw up on her desk, right on top of the offending envelope in all its glossy, card stock weighted glory.

Why did they send her an invitation this year? They had to know she wouldn’t go. How could she show her face in a room filled with her ex’s family and friends? Why would she want to?

“Dam, I should have recycled it.” Eva said. She appeared in front of Andi, her face creased with concern. “I’m sorry. I knew I shouldn’t have given it to you. Do you need a drink? I can get you a bottle of water. I think we might even have some wine in the back. I can get you what-”

“I’m fine.” Andi took a deep breath and sat up straight. The only way to make it was to fake it so she slapped both hands on her desk and stood. “Now,” she said. “What needs to be done?”

Eva stared at Andi as if she’d spontaneously grown a horn out of her forehead.

“What?” Andi asked. “We have parties to plan, don’t we? After all, that is what people pay us to do, right?” She walked as she spoke, moving to the wall where they kept clipboards for each event.

“What’s okay?” She flipped through the pages, not seeing any of the lists.

“Sit.” Eva pushed a chair towards her.

“Sit,” she said again. This time there was enough force behind her voice that Andi stopped and looked at her friend. “It’s okay,” she said softly.

“I can’t do this,” Andi whispered. She could feel the tears building in the corners of her eyes and she hated herself for them. She’d promised herself months ago that she wouldn’t cry. Tears didn’t do any good. They never had. “I don’t think I can do this.”

“No,” she said and waved her arms around the room. “I can’t do this. Any of this. Christmas. The holidays. The happy, cheerful people. The kids singing carols and eating candy. Santa. Gingerbread. Any of it. Christmas is for families.”

“You have a family,” Eva said gently.

“You know what I mean.” Andi grabbed a tissue and dabbed her eyes before the tears could leak out.

“I know,” Eva said. She pulled a chair next to her friend and held her hand tight. “Andi, you will have a family. It wasn’t-”

“Don’t you dare say it wasn’t meant to be.” She snatched her hand away. For the last eight months, since her daughter had been stillborn, Andi had heard those words too much. They were what people said when they didn’t know what else to say. They were the words uttered by those who couldn’t handle seeing her in pain and thought she should just get over it. How did you get over losing a baby? How could you ever get over pain like that?

“Please.” Andi held her hand up to stop her friend’s tirade. Eva had never liked Blaine. From the moment they’d been introduced, she’d declared him a pretty boy who was too into himself and his career. She never understood what Andi saw in him. She didn’t see the tender side of Blaine that Andi did. The way they used to talk for hours about the future, how he used to encourage Andi to make Party Hearty bigger, to expand and become the biggest party planning firm in Calgary. And when Andi was pregnant with their child, how he’d sit for hours with his hand on her belly, talking to the baby and pouring through name books with her. They’d talked about getting married after finding out they were expecting, and there wasn’t a doubt in Andi’s mind that it would be perfect. Until it wasn’t.