A single dad in over his head. A woman determined to protect her heart. A little girl who needs them both. Is love strong enough to heal them all?

Morgan needs a change. One that will take her as far away from the heartbreaking disappoint of her life as she can get. Taking a job at a remote mountain lodge sounds like the perfect solution. But she wasn’t counting on Bo, the rugged mountain guide who has his own heartache to bear or his troubled little girl to slip through the walls she’s built.

Opening her heart again means exposing herself to the hurt that once threatened to destroy her. But if Morgan can let her guard down long enough to help Bo and his little girl, she might just see that everything she’s been looking for is right in front of her…including love.

“Get ready to have your heart strings yanked once again by Elena Aitken.” —Steena Holmes, New York Times Bestselling Author of Finding Emma

“No one writes a romantic, mountain man like Elena Aitken.” —Leanne Shirtliffe, Author of Don’t Lick the Minivan

Dear Reader,
Welcome back to the Canadian Rockies and CastleMountain Lodge, in the second of this series. (And no, you don’t have to read them in order.) This book showcases a different, yet equally,beautiful season in the mountains. As always, I truly feel that there is a special kind of magic in the mountains and amidst their ruggedbeauty, anything is possible. Especially love.
Elena

Castle Mountain Lodge was just gearing up for the busy summer season with only a few people milling around the lobby. As far as Bo Clancy was concerned, it was perfect. The last thing he needed to worry about was an audience on top of everything else. He paced in front of the fireplace and glanced around again for the staff manager. He’d been told that Carmen would be in the lobby, but so far he hadn’t seen her. It figured that just when he needed to talk to her, she would be busy. They still had a few weeks before the summer season was in full swing, which was good since it bought him a little more time to figure out what he was going to do. 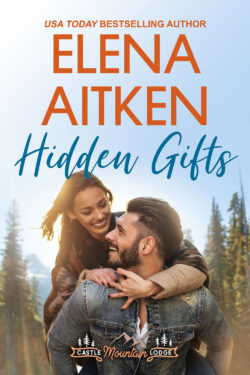 Bo had been set up to have another successful summer as the lead outdoor guide at Castle Mountain. He’d been running the summer program at the Lodge for the past three years and it was the perfect job for someone like him. Someone who’d rather be outside than in and, most important, didn’t have any family ties that would keep him from leading the overnight excursions. They were the most lucrative trips because of the tips involved, usually from the women. He’d gained a bit of a reputation as a flatterer and as a result was often specially requested to lead ladies’ groups. He never acted on his flirtations, at least not with the guests, but it didn’t hurt as far as the income was concerned.

That was all going to change this year, unless he could figure things out. Bo looked at the couch, where Ella was sound asleep. Curled up with his big cable-knit sweater as a blanket, she looked impossibly small. Her blond hair was fanned over her tiny arm that was tucked under her head. Her blond eyelashes fluttered against her porcelain cheeks. Bo stopped pacing and stood transfixed by her every breath. It didn’t matter how many times he looked at the birth certificate and read the letter, he still couldn’t believe she was his. He bent to touch her, to push the stray hair off her cheek, but he pulled away at the last minute, a familiar voice intruding on the moment.

Bo straightened up to see Carmen, accompanied by two other women, walking across the room. They stopped by the grand piano and he watched for a minute as Carmen gestured around the grand foyer. She seemed familiar with the petite, dark-haired woman–maybe they were frequent guests? But no, the other woman, the taller one, clutched a red binder in her hands. The Castle Mountain Lodge Employee Manual. He had one just like it somewhere in his bags. Not that he’d ever looked at it.

Carmen had never been his biggest fan. Not since the first year they’d worked together and he’d slept with her roommate. He was fairly certain the roommate didn’t remember it–it had been years ago–but Carmen had been frosty to him ever since. When he’d discovered that she was now in charge of staff, he’d been dreading the conversation he needed to have because based on past history, she wasn’t likely to help him out.

Bo took another look at Ella, still sleeping on the couch. “No time like the present,” he said aloud. He turned and crossed the room in three long strides. “Excuse me,” he said, interrupting the women. “Carmen, I need to speak with you.”

Carmen turned, a fake smile that didn’t quite reach her eyes pasted on her face. “Nice to see you, Bo.  I’m just in the middle of something right now. Maybe we can catch up later.”

“It can’t wait,” he said. He flicked his glance to the other women and his gaze naturally landed on the taller of the two. She looked to be in her late twenties, which instantly intrigued him.

Older than most of the women working at the Lodge and she was attractive, very attractive. But she definitely had the look of a city girl who wouldn’t know the first thing about stepping out of the mall and onto the trail. Despite her slender waist and curves that begged to have his hands on them, city girls weren’t his thing. Even if he were looking for a diversion, which he wasn’t.

“I am sorry to interrupt, darling,” he spoke to her and turned on the charm. “You probably have a lot of questions about the Lodge and the mountains, after all, they can be intimidating. And I’m sure we can do our best to answer those for you later.” Without waiting for a response, he turned back to Carmen. “I do need to speak to you right now.”