A sexy movie star with a secret.
The woman hired to protect him from himself.
An attraction they never expected—and can’t deny.

Public relations rep, Megan has her work cut out for her keeping the movie star of the moment, Gage Mitchell out of the lime light and most importantly—out of trouble, or both of them will be looking for new careers.

Surrounded by wilderness, and tucked away in a remote mountain lodge far away from the paparazzi, there isn’t much for Megan and Gage to focus on—except each other. But when a dark secret from Gage’s past threatens to ruin everything, Megan and Gage stand to lose it all—including each other.

Dear Reader,
Welcome back to Castle Mountain Lodge. I’m very excited to introduce two newcomers to the Lodge, both of whom come from very different backgrounds. I had a lot of fun writing this story with Gage and Megan, who are both visiting the Lodge for the very first time. I hope you enjoy their story as much as I did writing it.
Elena

The moment Megan Powers saw the note on her desk, she knew what it was going to say. And she wasn’t going to like it. A memo from her boss, Lois Grace, the head of the Grace Agency, a top Los Angeles PR firm, was almost never a good thing. Especially when that memo was requesting your presence in her office as soon as you got in. Especially when that memo arrived the day after you broke up with her son. The one everyone, including yourself, thought you were going to marry. 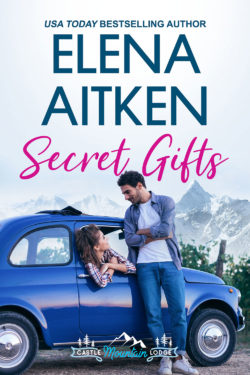 Megan dropped her head to her desk, and tried her best to think of what she could say. But it was hard to think on only a few hours sleep, and she’d need a pretty good explanation of why she’d broken Ryan’s heart. Better than the “I just don’t love you enough” excuse she’d given Ryan himself. But that’s only if she knew about it. And how would Lois know about the breakup when it had been less than twenty-four hours? Really, it was hardly even official. There would be no way Lois had heard about it.

Except Megan knew the chances of that were slim. Lois had eyes and ears everywhere. It was eerie how she knew everything all the time, but that was part of what made her so successful with her clients. Most of the time, Lois could figure out what they were going to do before they even did it. Megan hit her head lightly against the desk, trying to figure something out. Despite being omniscient, Lois also had a reputation for being a hard ass. But she was fair, too, and for the last five years that Megan had worked for her, they’d always had a good working relationship. One that was only made stronger when Megan had started dating Ryan, and Lois began talking about a family business and expanding the firm. But that was before she’d crushed her little boy’s heart.

“Good morning. Is there some reason you’re giving yourself a concussion today?”

Megan jumped up at her assistant Cindy’s voice. She smoothed her skirt and rubbed at her forehead where she was sure she’d have a mark.

“Well, you don’t have to quit on my account,” Cindy said. She snapped her bubble gum as she waltzed into Megan’s office with a stack of files and her morning latte. “Here.” She handed her the coffee. “Looks like you could use this.”

Cindy nodded and dropped into the chair across from Megan. She blew a big bubble and popped it before flipping open her portfolio.

Cindy nodded. It wasn’t the first time Megan had mentioned it and if she wasn’t such a great assistant, she might have actually done something about it. As it was, some battles weren’t worth fighting.

“Hey,” Cindy said. “It’s the gum or the smokes. I pick gum.” She clicked her pen and poised it over the paper. “So, are you ready to get to work, or what? I have your agenda for the day.”

Megan took a sip of her coffee, praying the caffeine worked quickly. She’d done nothing but toss and turn, wondering if she’d made the right decision by breaking up with Ryan. He was sweet and kind. Funny and handsome. Successful and…he was perfect. But not for her. Which was why it’d been so hard. And to watch his face, usually so strong and handsome, crumble when she told him it was over–it was heart wrenching.

But she couldn’t change her mind. Despite the hours of talking, and tears from both of them. Ryan wanted to get married. And that wasn’t happening. No way.

“Earth to Megan.” Cindy was waving a piece of paper in front of her face. “I get that you had a rough night, but you’ll get over it and in a few days everyone will stop talking–”

“Wait.” Megan snapped to attention. “What are you talking about? A rough night? How did you know and what do you mean, everyone’s talking about it?”

Cindy blushed and looked down at her paper where she was furiously drawing circles. “I didn’t really say that everyone was talking about it, but–”

“About what?” They knew. Megan’s stomach clenched into a knot and squeezed.

“About you and Ryan breaking up,” Cindy said and looked at her with pity.

“How does everyone know?” Megan asked despite already knowing the answer. They were a PR firm. Knowing things was their business.

“If it helps, no one is blaming you, not really,” Cindy said. “And Ryan isn’t in yet. But his assistant said–”

“Stop.” Megan held up her hand. “I need to think.” She took another sip of her latte, not caring that the hot liquid burned her tongue.

“I really am sorry,” Cindy said. “Is there anything I can do?”

Megan reached across her desk and handed Cindy the memo. “Yes,” she said. “Tell me what I should do about this.”

Her assistant scanned the note and to her credit, didn’t brush it off. Instead, Cindy let out a low whistle. “You think she knows?”

“And she’s probably not very happy about it either,” Cindy added.

Cindy handed back the note. “If I were you, I wouldn’t put it off much longer,” she said. “Besides, how bad could it be? Lois is a professional.”

Those were the words Megan kept in her head as she walked down the hall. How bad could it be, really? After all, Megan was one of her top agents and that wasn’t going to change just because she wasn’t going to marry Ryan. She’d continue to do a good job, and they’d continue to work together and everything would be fine.

She’d almost talked herself into believing it by the time she arrived at Lois’ office. Her assistant waved her right in as if she’d been expecting her. Which she no doubt was.  With a deep breath and a tug at her jacket to pull it into place, Megan walked through the doors.

Lois, blond hair pulled back into a low bun, makeup meticulous, and looking much more like Megan’s sister rather than her almost mother-in-law, was reclining in her chair, twirling a pen between her perfectly manicured fingers when Megan walked in.

Megan tucked her own chewed-to-the-nub nails behind her. It was a bad habit she thought she’d broken, until a few hours earlier when she’d walked out of Ryan’s living room. “Lois,” she said, doing her best to go for calm and relaxed. “Good morning.”

“It is,” Lois said coolly. “There’s nothing quite like a California morning, is there?”

Megan nodded, and gave her a smile. She walked through the room and tried her best to get a read on Lois. Did she know? Was she mad or ready to demand answers out of Megan? She couldn’t tell. Lois was practically impossible to read–it was one of her best traits–but at the moment, Megan was finding it exceedingly troubling.

“You wanted to see me, Lois?” Megan sat across from her and crossed her legs. She was careful to make eye contact the way she normally would because she was determined not to let her personal life impact her career with the Grace Agency. She’d worked too damn hard.