She’s a single mom. He’s a rock star. The only thing they have in common—is each other. Will it be enough?

Single mom, Beth Martin is doing her best to raise her daughter Jules on her own after moving back to the her home town. She’s been welcomed back by old friends and a great new job. Things are going well, but she can’t help but feel like something—or someone—is missing.

When sexy rock star, Slade Black comes to town, he just might be what Beth is looking for. But the exciting rock star lifestyle isn’t really suited for small town life—and definitely not for single moms.

But when Beth sets aside her responsibilities and takes a chance on him and their budding relationship, the consequences might be more than either of them can handle.

By the time Beth Martin navigated her secondhand SUV up the icy mountain road to the Springs resort, she was ready to turn around and head back down. It was way too cold of a day to be at work, even if work was a luxury resort built around natural hot springs. Maybe she could find a moment to sneak off and absorb some heat from their steam, she thought as she parked her car. 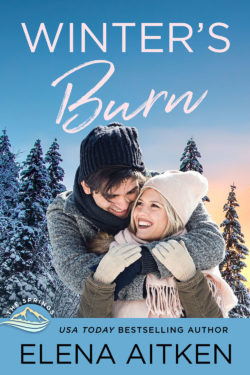 Despite the urge to turn around and spend her day cuddled up under her quilt with a good book, nothing would keep Beth from work. Not only did she love her job as the staff physiotherapist at the resort, she was dammed lucky to have it and she knew it. She wouldn’t be doing anything to screw up that opportunity any time soon.

She tugged the zipper of her parka up as far as it would go, made sure her knit cap was firmly in place and braced herself against the bitter wind and made her way as quickly to the staff entrance door as possible in her snowboots and thick coat. There were lots of advantages to living in the Rocky Mountains, but snowstorms in January weren’t one of them. It didn’t seem to matter how many winters she lived through in her hometown of Cedar Springs, she’d never get used to the storms that blew in over the mountains with what seemed like no warning at all.

In a whirl of snow and ice, Beth pushed through the door and into the back hallway. As soon as the door was closed behind her, she allowed herself a moment of rest and leaned back against the wall. Winter had a funny way of making you feel like you’d lived an entire day by eight in the morning. Or maybe it wasn’t winter, but the battle she’d had with her daughter trying to get her out of the house. It’s not that Jules was a bad kid–far from it. But at twelve, she definitely had a strong sense of what she wanted, and if those wants didn’t coincide with Beth’s ideas, it was a recipe for disaster. Or at least a morning that resulted in Beth needing a stiff drink with her coffee.

Beth pulled off her hood and shook her blond hair loose.

“Pretty nasty out there, hey?” Carmen, her friend and the customer service manager of the Springs, came around the corner. At six months pregnant, she still looked svelte and Beth never would have known she was pregnant if it weren’t for the glow of happiness that surrounded the woman.

Beth certainly hadn’t looked so radiant when she was expecting Jules. Of course, unlike Carmen, Beth had been barely eighteen, and totally alone. Not exactly the same situation.

“It is.” Beth shook the snow from her coat. “And the roads are terrible. I’m lucky to be alive,” she joked.

Carmen laughed and linked her arm into her friend’s. “Well, I’m glad you made it.” They started walking down the hall towards the staff room. “It’s a big day today. Our first celebrity guest is checking in.”

Beth’s step faltered, and she hoped Carmen didn’t notice. She knew exactly who was checking in. To her irritation, she’d thought of little else since she’d heard the news a few months earlier. Slade Black. Beth forced a smile and tried her best to appear totally unaffected. “That’s right,” she said. “Sam was talking about that at the Grizzly Paw the other day.” She felt like an idiot stating the obvious. Carmen had been sitting right there when her best friend, Sam, told them all that the lead guitar player for the band Jacked Crackers would be returning to their small town. Of course Sam had mentioned that news two months earlier, as well. Apparently he’d promised the band to stay until after Christmas. Not that Beth was paying attention. “He’s that guitar player for the band Jacked Crackers, right?”

Carmen stopped and stared at her. “You know who he is. Didn’t you meet him at the summer solstice festival?” Beth shrugged, feeling more and more like an idiot by the minute. “Maybe the cold is getting to your head.” Carmen laughed and tugged at Beth’s arm. “Let’s get you warmed up with some coffee.”

She couldn’t agree more. It had to be the cold weather that was starting to affect her, because all she’d been able to think about for the past few days was the way Slade Black had looked at her when they’d met months earlier. There’d been more heat and promise of passion conveyed in that one brief moment than Beth had experienced in her entire life. Not that Slade would remember her. He probably looked at hundreds of women that way every day. And wasn’t that what was really bothering her? That she was just another girl? “Coffee would be good,” she muttered. She needed to shake Slade Black from her brain. She had no business lusting over a man. Particularly a rock star, with a reputation.

The sooner she could force him from her mind, the better.