He’s used to getting what he wants. And he wants her.
Successful, handsome and too damn charming for his own good—he’s perfect.
The only problem? Letting him in could destroy everything she knows and loves.

Samantha Burke loves her quiet close-knit community of Cedar Springs, just the way it is thank you very much.
The addition of an upscale new resort as well as its arrogant owner, Trent Harrison, and the change they’re both sure to bring to town, is certainly not welcome.

As far as Sam’s concerned, Trent can turn right around and go back to where he came from.
That is, until one very hot—and completely unexpected—kiss changes everything.

Now Trent is pushing his way into her town, and her life and it’s getting harder and harder for Sam to deny the heat between them.

Change is inevitable, but can either of them drop their guard long enough to accept it when there’s so much on the line? Including the chance for love?

Dear Reader,
Welcome to The Springs!
This series is a crossover from The Castle Mountain Lodge Series, where some of your favorite characters might make appearances, but as with all my books, they can be read in any order.
The Springs is a little bit steamier than the Lodge, but one thing remains the same,—love.
Thank you so much for taking a chance on this series! I hope you enjoy The Springs!
Elena

The sun was shining high overhead by the time Samantha Burke finished up with Lorne Walton, her account manager at the bank. She lifted her face to the warm sun, and tried to calm down before heading back to her bar, the Grizzly Paw. After all, it wasn’t Lorne’s fault he couldn’t approve her loan. She knew she wasn’t a good credit risk. Not after having to throw everything she had into buying the bar from her father. But it was Lorne’s fault that he was such a jerk about it. 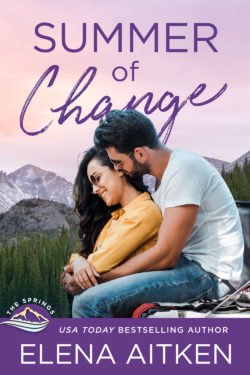 She swallowed hard, remembering the way he’d lectured her on trying to run a business in a small town and how the Grizzly Paw was going to be at risk of going under if something didn’t give. Sam kicked at a stone on the sidewalk. She knew exactly what it was, too. The stupid resort that was going in up the road. It was changing the fabric of her town. People were scared, nervous about how the Springs opening would change the dynamic of their town. They were staying home, not eating out at the Paw anymore.

She took a minute to look around the main street of her beloved small town. In the green at the end of the street, kids played while their mothers chatted over coffee at one of the picnic tables. Sam could walk down to the lake, and on her way she’d be greeted by name by everyone she passed. The people of Cedar Springs were close. They looked out for one another and they cared about their picturesque mountain town. Outsiders weren’t going to care. They were going to travel into town and destroy the peace and quiet, not to mention the extra cars, noise, and garbage they were likely to bring with them.

She sighed and laughed at herself a little because she knew if anyone could hear her thoughts, she’d be accused of being a crotchety old woman. And it wasn’t that; she just wanted what was best. And as far as she could tell, it wasn’t the Springs hotel.

With a shake of her head, she squeezed her files tight to her chest and walked back to the bar at the end of the road.

“Excuse me?” A deep male voice stopped her. “Can I ask you a question?”

Sam turned slowly, cautious of the strange voice and when she saw the owner of the voice, her heart did one of those stupid schoolgirl fluttery things. He was tall; his strong shoulders looked broader, encased the way they were in a well-cut suit. He ran a hand through his sandy blond hair that immediately flopped down over his forehead again. His hair was a juxtaposition to the clean-cut look he was trying to portray, but it was intriguing, and very sexy.

“Yes?” Sam drew out the word. She was pretty sure he could ask her anything and she’d be happy to answer it.

Ah. Of course. The suit. Locals didn’t walk around dressed like that. He was likely with the hotel.

She stiffened, quashing any attraction she felt for the man. “You’re with the hotel.” It wasn’t a question.

“Sorry,” Embarrassed by her rudeness, her face reddened. “I’m just not really excited about the resort. It’s not necessary.”

“I don’t understand. I think the resort would be bringing a lot of jobs to the town.” He crossed his arms, and tilted his head, obviously amused by her. “Not to mention the tourism.”

Anger and annoyance boiled through her. And something else. Something she didn’t want to identify. “That’s right. Now if you’ll excuse me, I have work to do.”

“Okay.” He spoke slowly. His eyes filled with puzzlement. “But, the barber shop…”

Sam stopped herself before turning around. “It’s across the street, next to the cafe. But if you ask me…”

She spun quickly and bit her bottom lip. What on earth made her say that? Oh, she knew exactly what made her say that. The man’s eyes, his cocky smile, and his sexy shaggy hair had made her stomach flip. But it didn’t matter–the man represented the enemy. She probably should have recommended Betsy at Hair Affair; she would have dyed it blue and permed it. And maybe that would be a good thing. Especially if it stopped the insane urge Sam had to run her hands through his hair.

She’d walked for five minutes, so lost in thought and chastising herself for even entertaining thoughts about a man who was in any way connected with the Springs that she didn’t even realize she’d gone in the opposite direction of the Grizzly Paw. She circled back and shook her head clear of the thoughts and it wasn’t until she finally set foot in her bar, after going the long way around, that she realized as annoying as the man was, he’d succeeded in distracting her from her financial troubles. At least for a few minutes.