He’s falling for a beautiful stranger.
She’s guarded and unsure.
The truth of her past could destroy their new love.

The last thing Officer Rhys Anderson expects to encounter at the end of his quiet Sunday afternoon shift is a beautiful stranger stranded on the side of the road.

All Kari Fox wants to do is run as far away from her life—and her controlling ex-husband—as possible. She never planned on ending up stuck in a small mountain town, and she definitely never expected to fall for the handsome police officer who’s helping her out.

With a new job, some new friends and a steamy new relationship, things are finally beginning to go right for her, and Kari even start to believe that she might have a future in this sleepy little town—and with Rhys.

But Kari has secrets. Secrets that threaten to destroy everything she’s trying to create, including her new relationship. As the truth comes to light, will their connection be strong enough to withstand the truth of her past?

The last thing Officer Rhys Anderson wanted to be doing on a sunny Sunday afternoon in Cedar Springs was responding to a random call out. Particularly considering he was almost finished with what had been a very long workweek. 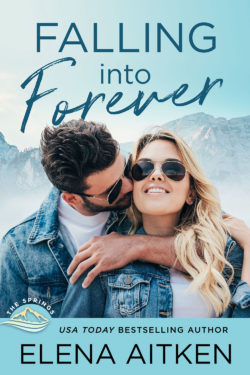 “It couldn’t have waited fifteen minutes,” he muttered to himself as he guided his patrol car down the street after leaving his friends enjoying themselves at the Grizzly Paw pub. “Then Jones would have had to take care of it. Fifteen minutes.” Rhys shook his head as he pulled up behind the stalled car, it’s hood up and flashers on. The radios were on the fritz–again–so his dispatcher, Janice, hadn’t been able to tell him what the call out was for. Which is why Rhys had one hand on his weapon as he made his way to the car.

A flash of movement from the front of the car caught his attention and as a reflex, he pulled his gun and almost immediately cursed himself for doing so. He wasn’t in the city anymore. It was goddamm Cedar Springs. Population, not enough for trouble. Just the way he liked it.

Rhys lowered his weapon and holstered it at the sight of the petite woman he’d surprised. “I’m sorry, ma’am.” He held his hand up and approached slowly. “I didn’t mean to startle you. Is everything okay here?”

She stared at him for a moment. Her eyes darted down to his gun before she shook her head. “No,” she said. “I mean, yes. They’re fine.”

Her voice shook and Rhys again cursed himself for being paranoid for pulling his weapon on a stalled car. He must be exhausted, and he was letting it get to him. There was no need for the big city dramatics. Especially now that he saw the unfamiliar woman, who was likely one of the many new tourists who had descended on the quiet town once the Springs resort opened up the hill. She was also remarkably beautiful. A fact that was definitely not lost on Rhys.

“Which is it?” He tried to keep his voice light. “Everything okay? Or not?”

She shook her head and opened her mouth to say something before she changed her mind. “No,” she said. “Everything is not okay.” She turned to face the engine again, and instead of following her gaze, Rhys studied her profile. Smooth, creamy skin, delicate features, and…a bruise.

“Ma’am.” Rhys took a step forward and glanced down at the bumper of the car. “Are you hurt?”

“You didn’t crash into anything?”

“What?” she asked again. “Why would you…Oh.” Her hand flew to her head. Her fingers danced carefully over what looked to be a tender spot. “Yes.” Her voice broke. “I had a bit of a fender bender the other day.”

Rhys raised his eyebrow and looked again at the immaculate bumper of the sedan. Following his gaze, the woman added, “It was fixed up already. They were really quick.”

“Well, what seems to be the problem with the engine?” He put a smile on his face and moved under the hood. He didn’t miss her soft exhale as he dropped the matter of the accident. “Maybe I can see what’s going on.”

“Thank you. I really am sorry to trouble you. I didn’t mean for the police to come out but she insisted she should call.”

“Wait.” Rhys stepped back and turned his attention from the hoses and belts in front of him back to the beautiful woman whose name he still didn’t know. “Who insisted?” As he asked the question, he knew the answer. He shook his head and ran a hand through his hair. “No. Let me guess. Sweet little old lady, about this tall.” He held his hand somewhere around chest height. “Lives over there?” As Rhys pointed, they both turned and looked in the direction of the yellow house with the white porch. “Hi, Aunt Daisy,” Rhys called. To the woman, he whispered, “She thinks I can fix anything.”

He looked down into the most interesting eyes he’d ever seen. A blue so deep they were almost black; white flecks made them look almost like marbles he’d collected as a kid. Stunning. Especially since the owner of those eyes was smiling. The first he’d seen from her.

“I don’t know about sweet.” He waved at his aunt and turned back to the engine. He’d have to go over and say hi when he finished. It’d been too long since he’d been to visit. “Let’s see if we can get this working for you…I’m sorry, you didn’t tell me your name.”

She flushed. Her skin turned a pretty shade of pink; the blush spread down her neck, into her…Rhys lifted his eyes, forcing himself to focus on her face.

“Okay.” He nodded despite the fact that something seemed a bit off. “Kari.”

It was a pretty name and it suited her. Delicate and feminine, but with an undercurrent of something more. Something he might like to investigate further.

She swallowed hard and bit her bottom lip. “Thank you, Officer. I probably–”

She nodded and clenched her hands together. “Can you fix it?”

Her face fell and for one terrible moment, Rhys was afraid she might cry.

“It looks like your timing belt is torn and honestly, the best thing to do is get it to Doug. He’ll be able to tell you better than I can exactly what you’re up against. But one thing is for sure. You’re not going anywhere in this car for a few days.”

Dammit. This couldn’t be happening. She needed that stupid car. What good was a Mercedes if it wouldn’t run when it was supposed to?

Her lip quivered and, afraid she would cry, Kari bit down on her lip again. She couldn’t fall apart. Especially not in front of a cop. A very attractive cop. She pushed the thought from her head the moment it popped in. That was the last thing she needed.

“Kari,” Rhys said. His voice was kind and concerned and for a moment, a very brief moment, Kari let her guard down. But then he reached for her.

Instinctively she jerked back, out of his reach. “No.”

She nodded and took a deep breath. She needed to calm down. This was ridiculous. He was just trying to help and she was acting like a freak. She needed to get a hold of herself. And quickly.

“I’m the one who should be sorry,” she said. “You’re just trying to help. I think I’m just tired. It’s been a long day and I was really hoping to get farther today but this…” She waved her hand in the direction of the car and forced a smile. “What can you do? How do I get a hold of this Doug fellow?”

Rhys gave her a strange look. It hadn’t been the first. She really needed to pull herself together or he would ask questions, and that would only lead to trouble.