She needs his help.
He has nothing to lose.
Except his heart.

Known for his tasty dishes, and his even spicier personality, Executive Chef, Jax Carver’s star is on the rise and he’s quickly outgrowing the small town he’s come to call home. He’s never been the type to stay in one place for very long anyway. After all, settling down means opening up. And there’s no way Jax is about to put his heart on the line. Not again.

Bria Sheridan had no intention on finding herself in a sleepy small town, especially since she needs to turn in a juicy photo assignment or risk losing her job completely. She needs to focus on the task at hand. What she doesn’t need is a sexy chef who does nothing but push her buttons.

Jax might be the only one who can help Bria get the photo shoot of her career. And as long as they can keep their undeniable attraction for each other casual with no expectations, everything will work out. But that’s a lot to gamble on, especially since neither of them counted on having any real feelings for each other. But when those feelings are put to the test, will their connection be strong enough to save them? Or will the chance for love be lost for good?

It had only been a little more than an hour since Bria Sheridan had been accompanied up to what was a very fancy room at the Springs hotel. The management said they would comp the room, and so they should for all the money they were swindling out of her grandmother, Mona. A flash of guilt flared through her when she replayed the scene she’d caused in the lobby. She hadn’t really planned to let things get so out of hand when she’d arrived at the resort and they wouldn’t tell her where her grandmother was. But she also hadn’t planned to go and personally haul her grandmother out of there. At least not until the night before, when Mona told her over the phone that she’d be staying at least for the next two months. No way was Bria going to stand for that. Besides, until her latest photo assignment was finished and accepted, she didn’t really have anywhere else to go. It seemed like a good solution. 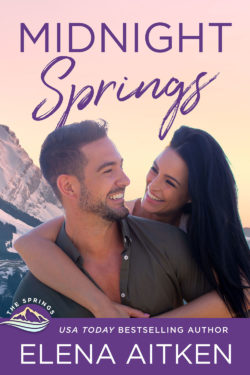 The Springs billed themselves as a place with magic healing waters, but all Bria could see was an overpriced spa that prayed on the elderly who only wanted a miracle they couldn’t have—no matter how much money they spent. At least she’d gotten there when she had; who knows how much money she’d saved her grandma from spending. But first she had to convince her tough-as-nails grandma of that.

There was a sharp knock at the door and Bria didn’t even have to guess who it was. She doubted very much it was room service coming to bring her complimentary champagne and strawberries.

“Speak of the devil,” she muttered as she opened the door. Her face transformed into what had to look like a very fake smile. “Grandma.” She held her arms out to her favorite relative, but Mona only pushed past her into the room.

“Don’t you Grandma me, young lady. Do you know what it’s like to walk out of a therapeutic treatment where some handsome yet unseen young man with fingers like a god made me feel like a young woman again, only to be met by a security guard who tells you that your favorite granddaughter has just made a scene to end all scenes and has been escorted to a room where she’s waiting to speak to me? Do you have any idea what that’s like? Because it’s kind of a buzzkill.”

Instead of feeling chastised as she probably should have, Bria stuck her chin up and put her hands on her hips. “This is crazy, Grandma. This place is taking advantage of you.”

“They’re not and I can’t believe they’d give you a room after the tantrum you likely had in the lobby. What they should have done was call Rhys Anderson and escort you to the Cedar Springs jailhouse.”

Bria had to bite back a laugh at her grandmother’s choice of words. “First of all, I don’t think they call them jailhouses anymore. And second of all, you’ve clearly been here too long if you know the name of the local police officer. Or have you been the one who’s had to visit the jailhouse recently?”

Bria hoped her lighter tone would defuse the tension. She hated there to be any bad feelings between them. Especially if she was going to convince her grandma to leave this place before it bankrupted her.

Just as she thought it would, Mona’s shoulders relaxed and her face split into a smile. “Well, however you got here, you’re here and I can’t think of anyone I’d rather see. Besides, you come by that attitude naturally.” Mona winked and held out her arms. “Come give your grandma a hug.”

Bria let herself get pulled into her grandmother’s embrace. It had always been her favorite place to be: her safe place, long after she should have been too old. She inhaled deeply; her childhood self hoped to get a lungful of her grandma’s warm cinnamon fragrance that always reminded her of fresh baking. But it wasn’t there. Instead, it was a pungent oil that filled her senses: a heady mixture of musk and flowers and something that was distinctly not her grandmother. Bria pulled away abruptly and tried to mask her shock.

“You’re too thin.” Mona pushed past her into Bria’s posh room. She walked right past the pillow bed where Bria had dumped her small suitcase, and directly to a door she hadn’t noticed before.

“The customer service manager, remember?” Mona rolled her eyes when Bria nodded. She’d met so many people since she’d stormed through the front doors of the Springs. They’d all been friendly, too. Starting with the very good-looking and slightly cocky—okay, really cocky—dirty blond, slightly scruffy in a way-too-handsome way guy. He’d thrown her off her game a little, which was probably a good thing considering she’d been behaving like a first-class brat. Even she could admit that. She blushed slightly with the memory.

“I remember. The pregnant one,” Bria admitted. “Why is she so clever?”

Mona twisted the handle and pulled the door open to reveal a room behind it. “She put us in adjoining rooms.” Her grandmother lit up in a smile. “And wait until you see my suite.”

“Suite?” Bria groaned at the thought of how much a suite would cost her grandmother in such a fancy place. She followed her through the door. “Do you really need a whole…” Her objections died on her lips as she took in the room.

Although Bria had been impressed with her own accommodations, her grandmother’s suite was ten times bigger and fancier.

Nice was an understatement, and by the look on her grandmother’s face, she knew it too. Bria walked around the space. Her fingers trailed over the smooth polished wood of the dining table, the granite countertop of the kitchen and the…wait a minute. The kitchen?

“Why do you need a room with a kitchen in it?”

It was no secret that Mona didn’t cook. Not even a little bit. It was a family joke that she could barely even heat up soup without burning it. The only time Mona ever set foot in a kitchen was for her once-a-year cinnamon bun extravaganza. It was a tradition ever since Bria was a little girl that her grandma would spend an entire day, from dawn until well into the night, mixing, rolling, rising, and icing cinnamon buns. They were always best fresh out of the oven and everyone who knew about it seemed to casually drop by that day to get a taste of her famous buns. But whatever wasn’t eaten was frozen and brought out over the course of the year. Bria could never figure out why she insisted on only baking once a year when everyone so clearly loved her cinnamon buns, and she was so good at it, but her grandma insisted that by not doing it all the time, it remained special and people cared about it. There was some logic in that, Bria supposed, but as a little girl, all she could think of was the taste of the warm sticky bun in her mouth and the lingering scent that always seemed to cling to her grandma, even months after she’d cooked her last bun. The scent that was so obviously missing when Bria hugged her.

When was the last time her grandmother had baked? Was her arthritis really so bad?

Her grandma waved away the question. “This is how all the suites come. I usually take my meals in the restaurant. You should taste Jax’s food. He is a miracle worker.”

Jax. The name seemed vaguely familiar. But there was no way she would have met him. Nor did she want to. Bria had no intention to stay at the resort for one moment longer than necessary.

Not that there was anywhere else for her to go. The thought crossed her mind before she had a chance to block it.

“We’ll have dinner down there and you can meet him. He’s so funny and very talented in the kitchen, of course. Such a nice young man. Really, they are all so pleasant here at the Springs. I met the loveliest young guitar player. Simon Black, but he called himself something else. I don’t know why. The name Simon is perfectly good and—”

“Wait.” Bria held up a hand to slow her grandma and her rambling trail of thoughts so she could catch up. “Black? You mean, Slade Black?”

There had been some sort of rumor about the famous guitar player who’d left his band and started up a solo career after falling in love with a single mom in a small town. “No way.” All the pieces fell together. “That was here? And you met him?”

Her grandmother stood straight and patted her hair. “Not only did I meet him, but some would say I was instrumental in his life.” She waggled her eyebrows and smirked.

Bria couldn’t help it; she burst out laughing. “Of course you were, Grandma.”

“You’ll see. You stick around here long enough and I’ll even help you, my dear.”

The laughter died on Bria’s lips. There was no help for her. She’d made sure of that. With her career on life support and her personal life little more than nonexistent, there wasn’t much to help. But she wouldn’t fail at everything. She took another look around the opulent surroundings; her gaze rested back on her grandma. No. She’d save her grandma from making the biggest mistake of her life and throwing her life savings down the drain. That she could do.