Nothing Stays in Vegas 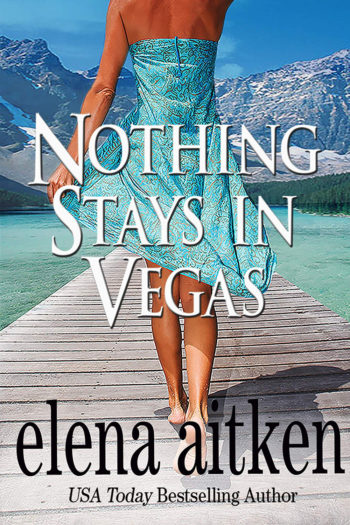 What happens in Vegas, stays in Vegas…except when it doesn’t.

Lexi Titan has mastered the art of pretending everything’s fine. After all, how else could she ignore the fact that her husband is never home, her son barely knows him and the last time she had sex, well, who can remember?

With her life crumbling, the last thing she wants to do is go on a trip, especially back to Vegas; a city full of glitz, excess, and Leo, the man she’s spent the last six years trying to forget. But when her best friend announces she’s getting married, Lexi doesn’t have a choice. Besides, it’s ridiculous to avoid an entire city because of one guy. Even if he is the father of your child.

Face to face with memories of the past and the gorgeous man who started it all, Lexi can no longer deny the truth to anyone, especially Leo. But honesty will come at a price, and Lexi must decide if she’s wiling to take that risk. And what exactly will she tell her husband?
Because as she now knows, NOTHING STAYS IN VEGAS.

Other Books in the Vegas series 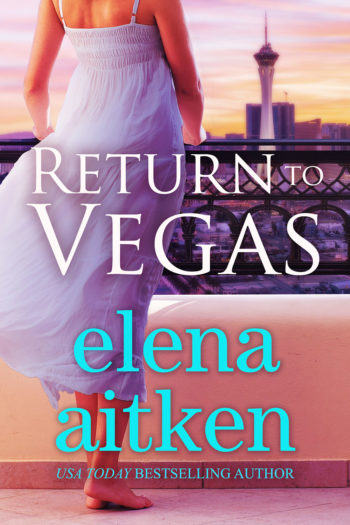 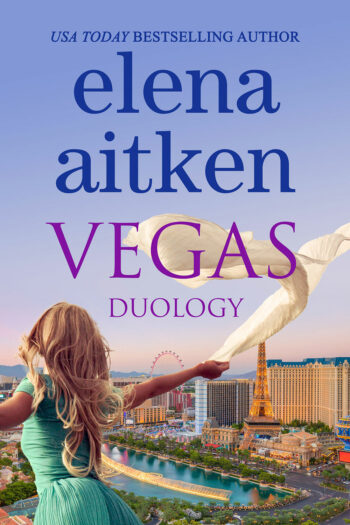 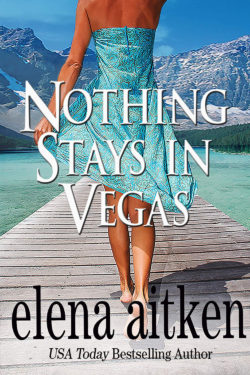 The music was too loud. Maybe it was me. Was twenty-seven too old to sip an overpriced cocktail, wearing a too-short skirt and a too-tight top? Judging by what some of the other ladies were wearing, no.

I tugged at my skirt in a vain attempt to pull it closer to my knees. Preferably over them. Nicole was late, as usual; it would take at least twenty minutes to go back to the room and change. There was no time. One thing was for sure, I’d never again buy anything an eighteen-year-old sales girl declared, “Totally perfect for Vegas.”

The fluorescent blue liquid swirled around my glass as I fiddled with my straw.  A “Knock Out,” the bartender had called it. It was going to knock me out. Every time I took a sip, the sweetness sent bites of pain through my teeth. Yet I couldn’t seem to stop drinking it.

“Excuse me,” a voice from behind said.

I swiveled in my seat to see a very blond, very clean cut, very preppy guy. Good looking if you liked the college boy look.

He was standing over me, not even trying to conceal the fact that he was staring at my cleavage, which there was way too much of.

“Can I get you another?” College Boy gestured to my drink which I was surprised to see almost empty.

That would explain the dizzy feeling every time I moved my head. Knock Out, indeed.

“I’m married,” I said and turned back to face the bar. Where was Nicole?

“I’m Clark,” College Boy said as he took the seat next to me, “and nobody in Vegas is married.”

I twisted to look at him again. His smile dazzled. Clearly the result of thousands of dollars of orthodontic work. “Seriously,” I tried again. “I’m not interested.”

He leaned in and the smell of stale beer assaulted me. Over his shoulder I could see the table of his frat buddies, poking each other in the ribs and pointing in our direction.

Perfect. I was a bet.

“Listen, Kid.” I couldn’t have been much older then him, but maybe an insult would help. “I’m not interested in being part of your game tonight.”

“Come on, Baby.” His breath was hot and moist in my ear. I leaned back as far as I could without falling out of my seat but his arm snaked around me and yanked me toward him. “I just wanna have a little fun.”

“Maybe I can suggest a playground nearby.”

“Ouch,” College Boy said and pulled back in mock injury. “That hurt.”

“You think that hurt?”

Changing my approach, I slid my hand up the side of his face, being sure to give his cheek a little caress as I went.

“Yeah,” he murmured and closed his eyes. “That’s what I’m talking about.”

Without wasting anymore time I grabbed his soft, fleshy earlobe and twisted, hard.

“Ow!” His eyes snapped open and he jumped back but I still had a grip on his lobe. “Shit! Let go.”

When he didn’t answer immediately, I applied a little more pressure.

I let him go and his hand flew to his ear. He shot me a look which made it clear that whatever he was feeling towards me, it was no longer romantic. I gave him an innocent smile and a little wave as he retreated to his buddies who were howling with laughter.

Yes, I was definitely too old for this.

I turned around intending to return to my drink but my eyes landed on a man standing at the other end of the bar. He was tall, but it was his black hair and matching dark eyes that caught my attention. From the grin on his face I could tell he’d witnessed what happened. I offered a little shrug but didn’t look away.

He was handsome. No, more than handsome. He was gorgeous in a way that only guys who don’t know how gorgeous they really are can pull off. And he was coming over.

“I’m not trying to interrupt you,” he said. I looked him in the eyes. No, not black but perhaps the richest shade of brown I’d ever seen. Gold flecks caught the light making his eyes shine like onyx. I couldn’t look away. “I saw what happened to the last guy,” he continued.

“No,” he said with a grin. “It was great. I was going to offer my assistance, but it’s clear you didn’t need my help. I’m Leo.” He extended his hand, which I took.

His skin was warm but a shiver went through me when he squeezed my hand before releasing it.

Leo turned and we both watched as College Boy threw money on the table and started toward us on his way to the door. When he got close enough he glared and said. “Good luck, man. She’s married. And mean.” He pushed past us and out of the lounge, his buddies tailing him.

Leo shook his head and turned back to me. “I only have a few minutes. Do you mind if I sit here?” He pointed to the stool at the bar next to me. “Or would you rather be alone?” He held up his hands in mock defense.

I laughed. “Go right ahead. I’m just waiting for someone.”

“Since you’re waiting anyway, can I get you a drink? I promise I won’t try any  bad pick up lines.”

My defenses fell a little and I said, “Sure, since you promised not to try anything.”

“Never,” he said and smiled. His dark eyes lightened when he smiled which made them look even richer. I tried not to stare. “What are you having?”

I looked at the blue liquid at the bottom of my glass and shoved it away. “Anything but that.”

Leo called the bartender over. “Mike, can I get a coke and a vodka tonic for the lady.”

“Make that a vodka and soda,” I interrupted.

Leo turned to me and gave me a sly smile. I shrugged. He turned back to the bartender and said, “Make that a vodka and soda. Thanks, Mike.”

I watched while he made small talk with the bartender, who seemed to know him. There was something about his confidence that hypnotized me. But it might have been the effects of the Knock Out.

“So,” he said turning back to me, sliding my drink over. “Is what that guy said true?”

“That I’m mean?” I took a long sip of my vodka, enjoying the sharp contrast of the soda from the tooth rotting sweetness of my first drink. I rolled the liquid around in my mouth before swallowing and added, “Absolutely.”

“Well, I’ll withhold judgment on that one,” he said. “But what I really wanted to know is, are you married? Is that who you’re waiting for?”

Was he flirting with me? “Actually, no. I’m meeting my best friend. It’s her birthday. Well, not tonight, but this weekend. She’s always wanted to come to Vegas, so I caved.”

I could’ve smacked myself. Instead I grabbed my drink to prevent anymore random ramblings. If he was flirting with me, he wouldn’t be for long. But what was wrong with a little flirting? It might be fun if I had any idea at all how to do it.

“I’m here with Nicole,” I said hoping that I could avoid that particular line of questioning. Thankfully, he didn’t push it.

“So, what are you going to do to celebrate Nicole’s birthday?” he asked.

I smiled, relieved to talk about something else. “Her actual birthday is tomorrow and I told her she could choose what she wanted to do. So, I guess we’ll go out dancing somewhere.” I winced at the thought of braving a Las Vegas night club. “But tonight we’re keeping it pretty tame. We’re going to see a Cirque show. I can’t remember which one. They’re all the same, aren’t they?”

He laughed, smooth and natural. The image of warm caramel on an ice cream sundae popped into my head.