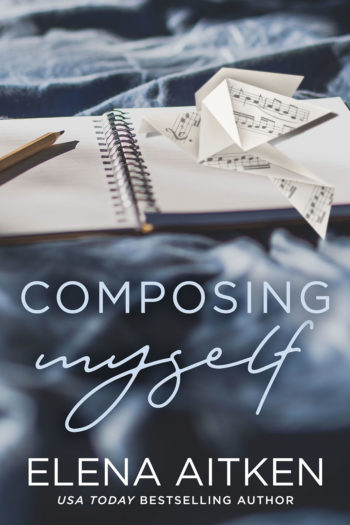 Whitney Monroe’s not ashamed of the way her mother can work a brass pole, not really. It’s just that some things are better left unsaid; especially when your mother’s a stripper and you’re trying to get a job at a prestigious private school that definitely won’t appreciate her talents.

Raised by her grandma, Whitney’s always managed to keep her two worlds separate, even if it meant lying to everyone. And when Reid Phillips—a charming, sexy songwriter—becomes her not-entirely-welcome roommate, Whitney has no intention of telling him the truth either. But she wasn’t excepting Reid to see right through her and challenge her compartmentalized life.

With Grams seriously ill, her mother’s life in turmoil and her dream job on the line, it’s more important than ever for Whitney to keep everything together. But that will mean being honest with everyone, starting with herself.

“Composing Myself is a heartwarming story of forgiving the people you love, and finding the strength to stand up and be proud of where you came from. I laughed, I cried, and I had a smile on my face when I turned the last page.”—Tracey Garvis Graves, New York Times Bestselling Author of On the Island

Dear Reader,
The process of writing a book is never just about crafting a story, making up characters and putting them through drama. For me, the process always becomes a journey and when I started writing Composing Myself, I had no idea where it would take me. I was totally unprepared for the flood of emotions that came out when I immersed myself in this story.
The relationship between the main character, Whitney and Grams, is a close one, and while it is fictional, it was inspired by my own relationship with my grandma. I lost her almost a year ago to breast cancer and I miss her every day.
It is my hope that this book takes you on your own journey, of acceptance, forgiveness and strength. Thank you, and enjoy.
Elena

One creamy leg wrapped around the brass pole, and in a move that could hardly be described as natural, her entire body flipped upside down and slid slowly to the floor. 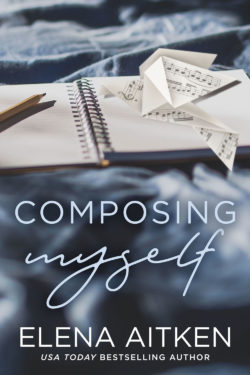 It wasn’t exactly pride I felt, but something else, as I watched my mother. Not everyone can say they have a mother who can work a pole the way she can. To be fair, I’m not entirely sure anyone else would want to say it. But she is who she is, and finally, after almost twenty-three years, I’ve accepted that fact. Mostly.

She got up off the floor and once again wrapped her leg around the pole. She began to spin; her hair, which was a candy apple shade of red for the moment, streamed behind her in a way that reminded me of a carnival ride.

“Hey, sexy, why don’t you get up there and make it a mother-daughter act?”

I had to will myself not to shudder at the voice. When I turned around, I was extra careful to breathe through my mouth in order to avoid the overwhelming stench of cheap cologne and stale cigarettes.

“Leon,” I said through clenched teeth and forced a smile we both knew was fake. I’ve always done my best to play nice with my mother’s co-workers, no matter how nasty they were.     Grams taught me to give people the benefit of doubt but I’d learned that some people didn’t deserve it. I winced when Leon took a step closer and took a step back, out of reach.

“Whitney Houston, good to see you again.” His beady black eyes travelled up and down the length of me, but I chose to ignore him, and the obnoxious nickname. The year I’d been conceived my mother had been overly inspired by the infamous pop star who was getting her start with hits like, “I Wanna Dance With Somebody.” Coincidentally, shortly after my birth, my mother was also getting her start; only she actually was dancing for those somebodies. It didn’t matter if that was true or not, that’s how I thought of it.

“I got some extra outfits in the back.” Leon was still talking and his stubby, nicotine-stained fingers managed to snag a piece of my hair. “It’ll be hot. You–with your mama.”

I leaned back and my hair slid from his grasp. With one hand, I pulled it over my shoulder and out of reach. “Keep dreaming, Leon.”

And I didn’t want any idea, either. He was persistent; I could say that much about him.

“If you’re not gonna show me what you got, why you here?” He shifted back in his chair and sipped on his ever-present whiskey.

“I have to talk to Patty.” I glanced towards my mother who was still spinning, albeit a little slower than before. I looked back at Leon. “It’s important.”

“Important or not, wait until after her set. She’s not getting paid to sit around and talk.” His tone turned nasty. It almost always did if I was unfortunate enough to talk to him for longer than a few minutes. I was just about to formulate some sort of smart-ass response when another familiar voice caught my attention.

“Whit! What a surprise.”

I turned, and moved straight into Stan’s open arms. It felt good to see him. As my mother’s sort-of-boyfriend-sort-of-husband, Stan was the closest thing I’d ever had to a father figure.

“Are you bothering my girl again, Leon?” Stan released me and turned to face Leon.   “Because if I hear even one–”

Leon held up his hands, and backed away. “You know I wouldn’t dream of it, boss.” He leered at me one more time and took off before Stan could say anything else.

“I’m sorry about that, Whit.” Stan gestured to a table for us to sit. “I know I should replace him, but despite his attitude, he’s actually cut out for this job and I’ll be honest, it’s easier for me to deal with him than to manage myself.”

“Really? You’re not getting tired of running the Lady, are you?” I rolled my eyes and Stan laughed. He was the exact opposite of what I would expect a strip club owner to look like. Not that I knew a lot of them. As long as I’d known him, he’d sported a full head of silver hair with a matching mustache. I used to think it was because he was so much older than my mom, but ten years seemed like a much larger age gap when I was a teenager than it really was. And as long as he remained a strong, grounding force in my mother’s life, I wasn’t complaining.

I glanced at the vinyl seat and tried not to think about what may or may not have happened in that exact spot. I’d been around the Lusty Lady long enough to know that Stan ran things totally aboveboard. He didn’t believe in blurring the lines or allowing his girls to go too far with the patrons. Regardless,  I tugged my coat off and tried to lay it on the seat without drawing too much attention to it, but Stan knew me better than that. He looked like he was trying not to laugh at me, which considering the smile that spread across his face, was probably pretty accurate. I shrugged and sat on my coat.

We had pretty close to front row seats, so I turned my attention back to the stage–and my mother–who was crawling along the floor on her special show blanket, while undoing her top. With a practiced hand, she flung the top to the side and revealed her remarkably perky, yet as far as I knew surgically unaltered breasts. For a woman who just turned forty-one, she looked amazing. Hell, for a woman of any age, she looked amazing. I crossed my arms over my chest and flipped my hair over my shoulder.

“She looks fantastic, doesn’t she?”