You can read Promised Gifts now at any of your favorite retailers! 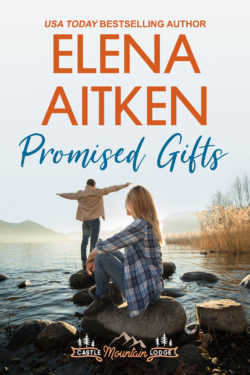 For as long as she could remember, Marissa Duncan had been completely and totally in love with her older brother’s best friend. She spent her teenage years secretly crushing on Nick Slater until one day—sure he felt the same way— she got up the courage to tell him how she felt.

But instead of reciprocating her affection, the boy she’d fallen in love with had laughed in her face and sent her away broken hearted.

It’s been eight years since Nick has seen Marissa Duncan. Eight years that he hasn’t been able to stop thinking about her and what could have been if he’d followed his heart the night she’d confessed her love to him. But the timing hadn’t been right, and there was a code between friends. He couldn’t date his best friends little sister. No matter what.

For eight years, Marissa has managed to avoid Nick, but there will be no way to avoid him at her brother’s wedding at Castle Mountain Lodge, the most romantic location in the Rockies. Especially since Nick’s the best man, and she’s agreed to be the maid of honor. She has no reason to be nervous, after all, she’s no longer the awkward, uncertain teenager she once was. Besides, what she felt for Nick was only a childhood crush.