Little Sister Gets Her Happily Ever After 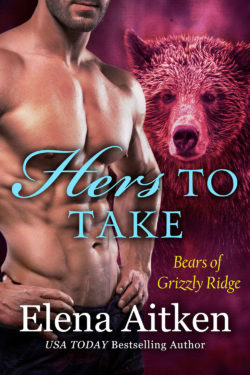 I’m so excited to let you know that Kira Jackson’s story, Hers to Take is coming SOON!

Hers to Take is the fourth book in the Bears of Grizzly Ridge series and I’m so excited to bring you Kira’s story, because I almost didn’t!

When I started writing the bears, I had planned the series to only be a trilogy. Each brother would have their story, and of course their happily ever after. It wasn’t until the second book, His to Seduce (Luke’s story) that people started asking about the brothers’ little sister, Kira. After all, they’d all been banished because of HER choice, right? So what happened to their little sister? What was HER story?

So many questions! And of course, they all needed answers. So…Kira’s story was born. I’m SO happy with how it turned out. It’s a little different, and there are a few twists, but I think it’s perfect for this strong, independent woman. And I hope you think so, too!

Hers to Take is available for Pre-Order NOW! And it will be delivered to your e-reader on March 28, 2017!
Kindle • Apple Books • Nook • Kobo • Google Play